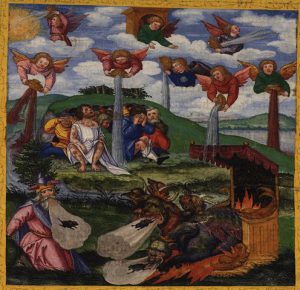 THE END IS NEAR!

Most of us are familiar with examples of the historicist approach. This is an easily abused approach to the book of Revelation. According to historicists, the end is near and we can see this by looking at certain historical events. Historicist interpreters try to connect the book of Revelation to very specific historical events. Some attempt to show how Revelation predicts events from the first century up until their own time. For example, E. B. Elliott relates the judgments associated with the trumpets (Rev. 8:6-9:21) to events “beginning with the attacks on the Western Roman Empire by the Goths [in A.D. 395] and concluding with the fall of the Eastern empire to the Turks [in A.D. 1453].”1 Historicists tend to have an interest in showing how Revelation predicts events that occur within their own time period. A common goal of these interpreters is to show that most of Revelation’s prophecies have been fulfilled. As a result, their time period is the final time period right before the second coming of Christ. Examples of this type of interpretation are around today. They are generally greeted with skepticism, because we know of too many failed attempts to pinpoint the timing for Christ’s second coming. The historicist interpreter’s positive contribution is that he expects to see the book of Revelation fulfilled in world events. Some aspects of the book of Revelation do correspond to historical events that have happened in the past or that are happening now. However, historicists, like preterists, tend to relate too much of Revelation to the past or the present. They do not leave enough room for Revelation to predict cataclysmic and unprecedented events that immediately precede the second coming of Christ.

The Goal of Historicists and Its Negative Effect

The historicist approach tends to sell books. It keeps readers asking, “Could this be the end? Are we living in the end times?” The goal of some historicists may be to encourage fear that the end is near, which may lead to repentance. Nevertheless, they have turned many people off to the book of Revelation. Many predictions of the book of Revelation have not been fulfilled, like those concerning the plagues of the trumpets and the bowls. When those predictions are being fulfilled, even the most academic among us will not be casually debating about whether the time of the end has come. It will be obvious to all.

Elliott’s book is called Horae Apocalypticae (1847). The quote is from Tenney, Interpreting Revelation, 138.

These paragraphs represent an expansion of a portion of my book:

Paul Hoskins, The Book of Revelation: A Theological and Exegetical Commentary, pp. 30-31.
Click on the image below to check out the book.