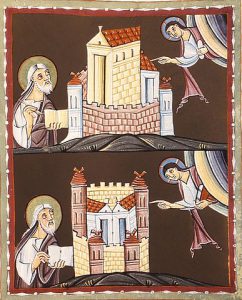 Overview of the Philadelphia Letter

The Philadelphia letter provides a marked contrast to the noticeable trajectory of decline that one observes in the progression from Pergamum to Thyatira to Sardis. Her letter corresponds to the letter to Smyrna in terms of both commendation and themes. The “synagogue of Satan” reappears as the instigator of problems for the church at Philadelphia (2:9; 3:9). Like Smyrna, Philadelphia has remained faithful to Christ in spite of opposition from the synagogue, and Jesus attributes no weaknesses to her. A primary concern of the Philadelphia letter is to demonstrate the goodness of what they have in Christ, especially in contrast to the claims of the synagogue of Satan. The letter has strong ties to the Old Testament and its promises to the people of God. Jesus promises the Christians at Philadelphia that they have a bright future to look forward to. They will eventually receive the blessed fulfillment of God’s promises to his people.

The Key of David and the Opened Door: What Are They?

In Revelation 3:7, Jesus is the divine Son of God who has the key of David. “Key of David” begins an allusion to Isaiah 22:22, where this is the name for the key that God entrusts to the chief steward over David’s house. The one who has this key “will open and no one will shut and he will shut and no one will open” (Isa. 22:22). Jesus is not being thought of as the chief steward over David’s house, for he is greater than any servant of David. Instead, he is the messianic King from the line of David (Rev. 5:5; 22:16), who rules over David’s house, the entire house of Jacob or Israel (Luke 1:33), and the kingdom of God (Rev. 3:21; 11:15). As such, he has authority to employ the key of David.

In Revelation 3:8, Jesus tells the Philadelphia church that he has employed his authority over the key of David for their good. He says, “I know your works. Behold, I have set before you an opened door, which no one is able to shut, for you have little strength and yet you have kept my word and have not denied my name” (3:8). The door that Jesus, their Messiah, has opened for them probably relates to the reward he promises to the faithful (3:12). Therefore, he is promising them that they will be able to enter the New Jerusalem, which is his city and his temple. Its gates will never be shut (Rev. 21:25). Jesus regards them as worthy of entry into his city, because this church with only a “little strength” has remained faithful to him. They have kept his word, which means that they have been obedient to the teaching that they have received, unlike the Sardis church (3:10; 12:17; 14:12). Like the Pergamum church, they have not denied his name, which is equivalent to denying their faith (2:13). Jesus’ commendation means that there must be some significant pressure to deny his name. The pressure that they are facing would most likely arise from the same source as the pressure at Smryna. Some Jews (the “synagogue of Satan”) are accusing them to the Roman authorities, which is causing persecution of Christians (3:9).

Paul Hoskins, The Book of Revelation: A Theological and Exegetical Commentary, pp. 106-8 (those pages provide further sources and footnotes that I have omitted above).