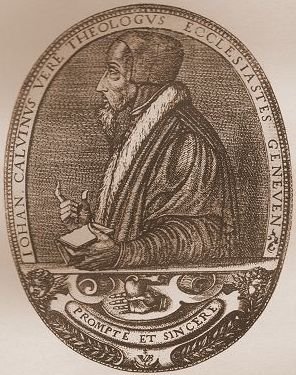 Like Chrysostom, John Calvin (d. 1564) is a proponent of typology and a critic of the allegorical interpretation of Origen. Calvin looks to the New Testament to help him to interpret the Old Testament (Puckett 178). In the long quote that follows, I have provided a section from Calvin’s comments on Galatians 4:22. It is clear from reading the quote that Calvin supports the idea that it is possible to distinguish between typology and the allegorical interpretation of Origen (and Philo).

In the quotation, you will want to notice several points. First, he criticizes those who follow Origen down the road of allegorical interpretation (paragraphs 1-2). Second, he says that “the true meaning of Scripture is the natural and obvious meaning” (paragraph 3). Third, he cites Chrysostom in support of his reading of Galatians 4:24 (“which things are allegorical [or speaking allegorically, allēgoroumena]”) (end of paragraph 3). Fourth, he notes that Galatians 4:21-31 has to do with typology (“events which happened in it are so many types to us”). He also supports the idea that typology is a species of “mystical interpretation” that is “not inconsistent with the true and literal meaning” (paragraph 3). Later, on Galatians 4:25, he says, “Sinai is called Hagar, because it is a type or figure, as the Passover was Christ.”

Here is the quote from Calvin. It is a bit long, but worth reading. He says,

“In the first place, as the other party armed themselves with the authority of the law, the apostle quotes the law on the other side. The law was the name usually given to the Five Books of Moses. Again, as the history which he quotes appeared to have no bearing on the question, he gives to it an allegorical interpretation. But as the apostle declares that these things are allegorized, (allēgoroumena) Origen, and many others along with him, have seized the occasion of torturing Scripture, in every possible manner, away from the true sense. They concluded that the literal sense is too mean and poor, and that, under the outer bark of the letter, there lurk deeper mysteries, which cannot be extracted but by beating out allegories. And this they had no difficulty in accomplishing; for speculations which appear to be ingenious have always been preferred, and always will be preferred, by the world to solid doctrine.

“With such approbation the licentious system gradually attained such a height, that he who handled Scripture for his own amusement not only was suffered to pass unpunished, but even obtained the highest applause. For many centuries no man was considered to be ingenious, who had not the skill and daring necessary for changing into a variety of curious shapes the sacred word of God. This was undoubtedly a contrivance of Satan to undermine the authority of Scripture, and to take away from the reading of it the true advantage. God visited this profanation by a just judgment, when he suffered the pure meaning of the Scripture to be buried under false interpretations.

“Scripture, they say, is fertile, and thus produces a variety of meanings. I acknowledge that Scripture is a most rich and inexhaustible fountain of all wisdom; but I deny that its fertility consists in the various meanings which any man, at his pleasure, may assign. Let us know, then, that the true meaning of Scripture is the natural and obvious meaning; and let us embrace and abide by it resolutely. Let us not only neglect as doubtful, but boldly set aside as deadly corruptions, those pretended expositions, which lead us away from the natural meaning. But what reply shall we make to Paul’s assertion, that these things are allegorical? Paul certainly does not mean that Moses wrote the history for the purpose of being turned into an allegory, but points out in what way the history may be made to answer the present subject. This is done by observing a figurative representation of the Church there delineated. And a mystical interpretation of this sort (anagōgē)was not inconsistent with the true and literal meaning, when a comparison was drawn between the Church and the family of Abraham. As the house of Abraham was then a true Church, so it is beyond all doubt that the principal and most memorable events which happened in it are so many types to us. As in circumcision, in sacrifices, in the whole Levitical priesthood, there was an allegory, as there is an allegory at the present day in our sacraments, — so was there likewise in the house of Abraham; but this does not involve a departure from the literal meaning. In a word, Paul adduces the history, as containing a figurative representation of the two covenants in the two wives of Abraham, and of the two nations in his two sons. And Chrysostom, indeed, acknowledges that the word allegory points out the present application to be (katachrēsis) different from the natural meaning; which is perfectly true.”

Calvin, John. Commentaries on the Epistles of Paul to the Galatians and Ephesians. Translated by J. W. Pringle. Grand Rapids: Eerdmans, 1948. The italics in the quote are original. I have added the bold.