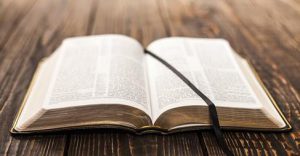 Examples of Typology and Allegorical Interpretation from Epistle of Barnabas

“For the Scripture saith, ‘And Abraham circumcised ten, and eight, and three hundred men of his household.’ What, then, was the knowledge given to him in this? Learn the eighteen first, and then the three hundred. The ten and the eight are thus denoted— Ten by I [iota], and Eight by H [ēta]. You have the initials [or initial letters] of the, name of Jesus. And because the cross was to express the grace of our redemption by the letter T, he says also, ‘Three Hundred.’ He signifies, therefore, Jesus by two letters, and the cross by one.”

“Now, wherefore did Moses say, ‘Thou shalt not eat the swine, nor the eagle, nor the hawk, nor the raven, nor any fish which is not possessed of scales?’ He embraced three doctrines in his mind in doing so. Moreover, the Lord saith to them in Deuteronomy, ‘And I will establish my ordinances among this people.’ Is there then not a command of God they should not eat these things? There is, but Moses spoke with a spiritual reference. For this reason he named the swine, as much as to say, ‘Thou shalt not join thyself to men who resemble swine.’ For when they live in pleasure, they forget their Lord; but when they come to want, they acknowledge the Lord. And in like manner the swine, when it has eaten, does not recognize its master; but when hungry it cries out, and on receiving food is quiet again.”

One can see the confusion of typology and allegorical interpretation in the Catechism of the Catholic Church (1994, section 117). The “allegorical sense” is described with the following statement: “We can acquire a more profound understanding of events by recognizing their significance in Christ; thus the crossing of the Red Sea is a sign or type of Christ’s victory and also of Christian baptism” (1 Cor. 10:2). Notice that this is not allegory at all, but typology.