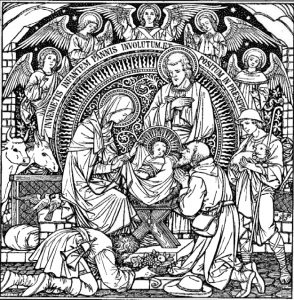 I recently posted Advent Bible readings for this year. I have prepared a handout in English and Spanish here. I think that it might be helpful for me to provide a short guide to go with those readings. Here is my guide for week one’s readings.

Guides for Advent tend to label each week with a particular theme. I found that the first week is often associated with the prophets and hope. Therefore, I focus the first week’s readings on the fulfillment of prophecy. As you progress through this week’s readings, you will want to focus upon God’s initial promises to David, the partial fulfillment of those promises in David’s sons, and the Old Testament predictions of further fulfillment yet to come. Luke 1:29-37, then, announces the final and complete fulfillment of God’s promises to David in the coming of Jesus. In order to understand this week’s readings, it will be helpful to think in terms of typology. My previous posts on typology will be helpful here. In this case, we are working with David typology.

The first reading is 2 Samuel 7:8-29. The critical verses here are Samuel 7:8-16. What does God say to David through Nathan the prophet? God recounts David the shepherd’s rise to become a shepherd over Israel. The one who once watched over his sheep near Bethlehem has become a shepherd over God’s people (7:8). God will use King David to deliver them from their enemies (7:9-11). His son will rule after him and will build a house, the Jerusalem Temple, for God (7:12-13). Notice that David’s son will also be God’s son (“I will be a father to him and he will be a son to me”) (7:14). This verse is critical for understanding the rest of the readings for this week. David’s sons who rule after him, starting with Solomon, will be God’s adopted sons as well. When they become king, they become God’s sons in a special way that sets them apart from the rest of the people of Israel. Recall that Israel as a whole is also regarded as God’s son (Exod. 4:22). God then promises that he will discipline David’s sons for their sins when that is necessary. Nevertheless, he will not forsake his promises to David. David’s “house” and “kingdom” will endure forever (7:14-16). In other words, God promises to David, who is from the tribe of Judah (Ruth 4), that David’s sons will be God’s chosen rulers over his people.

The second reading is Psalm 2. The connection between the contents of this psalm and 2 Samuel 7 is clear. God’s king from the line of David is God’s son in a special way (2:7). With respect to David’s sons apart from Jesus, a son of David becomes God’s son on the day that he becomes king (“today I have begotten you,” 2:7). He will triumph over the nations and their kings (2:1-12), because he is the Lord God’s anointed king who rules from Mount Zion in Jerusalem (2:6). It is important to focus some attention on the word “anointed” in Psalm 2:2. Most translations use the word “anointed” or “anointed one” here. This is the translation for the Hebrew word that we often transliterate into English as Messiah. The Greek translation for Messiah is Χριστός (Christos), which we often transliterate into English as Christ. As a result, the king of Psalm 2 is God’s Messiah or Christ. Prior to Jesus, David and his sons are God’s anointed kings, but Jesus is the Messiah who ultimately fulfills Psalm 2. See how Jesus fulfills Psalm 2 according to Acts 4:25-27 and Revelation 12:5, 19:15.

The third and fourth readings come from Psalm 89. Psalm 89:1-37 rehearses familiar ground about God’s promises to David and his sons. Psalm 89:38-52 provides the surprise element. The rule of David’s sons appears to have come to an end. They are no longer ruling from Jerusalem. This psalm probably reflects the problem created when Nebuchadnezzar conquers Jerusalem (586 B.C.) and God’s king is in exile (end of 2 Kings). After the exile, we hear about Zerubbabel’s role in rebuilding the Temple (Zech. 4:9), but he is the last son of David of the Old Testament. He has some role in leading the people of God after the exile, but it appears that he never becomes king.

In Ezekiel 34:23-31 and 37:24-28 (readings 5 and 6), Ezekiel prophesies that David will one day come to rule over God’s people once again. Ezekiel is prophesying from the midst of exile in Babylon. His words mean that a king from the line of David will arise to be a new David. He will reunite the people of God into one nation, one people. It is important to recall that after Solomon’s death Israel separated from Judah to become the northern kingdom with its own kings. Thus, Ezekiel holds out hope for a new king like David who is yet to come. The new king does not come until some 500 years later.

Luke 1:29-37 (reading 7) announces the coming of the long awaited king from the line of David. Like his predecessors, he will be a son of David and rule over the “house of Jacob” or Israel (1:32-33). He will also be a son of God. However, he will be greater than David’s other sons. He is not merely a son of God, but the Son of God. Luke’s account makes this very clear. Joseph and Mary’s son is quite unique. His birth is a miraculous birth that sets him apart from every other person who has ever been born into this world. He is the unique, divine Son of God. That is how he is going to be able to bring about the complete fulfillment of God’s lofty promises to David. He will rule forever. His rule will reach far beyond the bounds of David’s and Solomon’s kingdom. He will rule all the nations and the entire created order. He will overcome all of the enemies of the people of God, including the Devil and all of his allies. He is the antitype or fulfillment to whom David and his sons pointed.