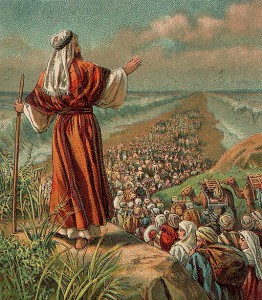 Typology is relevant for understanding many Old Testament quotations and allusions that we find in the New Testament.

Matthew 2:13-20 recounts the story of the baby Jesus’ time in Egypt. He goes down to Egypt due to the Lord’s command (2:13) and he comes out of Egypt at the Lord’s command (2:20). Between these verses is Matthew 2:15, which says, “And he was there until the death of Herod, so that what was spoken by the Lord through the prophet might be fulfilled, saying, ‘Out of Egypt I have called my son.’” The Old Testament quotation is from Hosea 11:1. If you turn to that passage, you can see that “Out of Egypt I have called my son” is not a prediction of something that lies in the future. Rather, it is an allusion back to Israel’s Exodus from Egypt. Later on, the Lord predicts a new Exodus for Israel (11:11). If Hosea 11:1 is not actually a prediction, then how can Jesus fulfill it?

The key term to focus on here is “son.” Who is the son in Hosea 11:1? To figure this out, look back to Exodus 4:22. God tells Moses, “Say to Pharaoh, ‘Thus says the Lord, “Israel is my son, my firstborn.”’” At the time of the Exodus, God introduces the idea that Israel is his firstborn son, which makes him Israel’s Father. As a result, the firstborn sons who are saved through the Passover lamb’s blood symbolize Israel as a whole. Israel is God’s firstborn son. Hosea 11:1 alludes to Exodus 4:22 when it says, “Out of Egypt I have called my son.” Through the events of the Exodus, God called his son, Israel, out of Egypt.

But in Matthew 2:15, the son of “Out of Egypt I have called my son” is Jesus and not Israel. This is where typology comes in. Matthew 2:15 makes sense if the fulfillment of Hosea 11:1 is based upon a typological relationship between Israel and Jesus. What God did in the case of Israel, he does again in the case of Jesus. God calls both of these sons out of Egypt. One can see that Matthew assumes a typological relationship between Jesus and Israel, if you look over at Jesus’ temptation in the wilderness in Matthew 4:1-11. Like Israel, Jesus is tempted in the wilderness. Unlike Israel, Jesus proves to be the obedient son that God desired Israel to be.

In conclusion, Matthew’s quotation of Hosea 11:1 makes sense once one recognizes that the fulfillment of Hosea 11:1 depends upon a typological relationship between Israel (God’s son) and Jesus (his son).