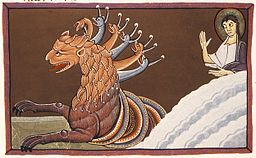 In a previous post, I introduced the idea that the quest for a specific name that would equate to 666 is probably a misguided quest. The modern reader can be forgiven for wondering about the practice of turning numbers into names. In John’s time, pagans and Jews had a system for equating letters and numbers that allowed one to provide the numerical value of a word or name. In Jewish circles, this practice is called gematria. One sees this practice in other works from around John’s time. For instance, one learns that the “reckoning” or “calculation” of a Greek spelling of the name Emmanuel yields the number 684 (Testament of Solomon 15:11) (Bauckham, Climax of Prophecy, 385).

“It Is a Human Number”

Given the practice of gematria and the phrase “it is the number of a man,” one can see why interpreters are trying to find a specific man’s name. They are trying to carry out John’s command to “calculate” or “reckon” the “number of the Beast” (13:18). If, as seen above, it is unlikely that the Beast’s number corresponds to a man’s name, then perhaps there is a problem with the translation “it is the number of a man.” The Greek phrase underlying this translation could also be translated as “it is a human number.” Revelation 21:17 provides an important analogy here. It says, “And he measured its wall, 144 cubits according to human measurement, which is also the measurement of the angel.” In these two cases, the adjective “human” assures the reader that the number or the measurement corresponds to the norms and expectations of humans. The Beast has a number that is a human number, that is, one that humans with wisdom can calculate or reckon.

666 and the Greek Word for Beast

If the Beast’s number does not provide a cryptic reference to a specific individual, then there would appear to be two remaining options for calculating or reckoning the number of the Beast. The two options are closely related and both end up stressing the symbolic significance of 666. According to the first option, one can calculate the Beast’s number based upon the Greek word for “beast,” namely, thērion. If one takes the Greek letters of thērion and transliterates them into Hebrew, the numerical value of the resulting Hebrew word is 666 (Bauckham, Climax of Prophecy, 389). Bauckham shows that this procedure accounts for two symbolic numbers in 3 Baruch 4:3-7, 10 (Jewish work dated 1st to 3rd century AD). John would find this to be quite interesting. The number of the Beast’s name is clearly a number with a symbolic meaning. Six hundred and sixty-six is a very suitable number to capture the nature of the Beast and to capture the Beast’s place in a like-minded group of three, the unholy trinity. In an upcoming post, I will develop the second option for calculating or reckoning the number of the Beast.

Paul Hoskins, The Book of Revelation: A Theological and Exegetical Commentary, pp. 257-258 (those pages provide further sources and footnotes that I have omitted above).