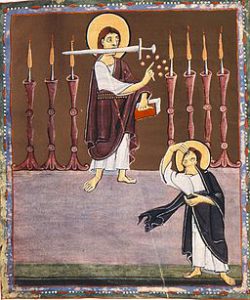 Overview of the Thyatira Letter’s Message: Beware of the Teaching of Jezebel

In this first post, I will provide a brief overview of the Thyatira letter and its message. The problems at Thyatira are an intensification of the problems at Pergamum. Pergamum is one of the powerful cities of Asia Minor. In comparison, Thyatira is a minor place whose main asset is her close connections to Pergamum.  The letter to Thyatira is the fourth and central letter of the seven letters. It is the longest of the seven letters and a climactic letter in several respects. While Ephesus has rejected the Nicolaitans and some at Pergamum are holding to their teaching, Thyatira has been tolerating this false teaching for a while. We know this, because Jesus has already called upon Jezebel to repent and given her time to do so (2:21). Among the seven letters, her letter is the climax of two themes, namely, the judgment of Christ and compromise with idolatry, which is a major theme of Revelation. The Jezebel typology of the Thyatira letter suggests that Jezebel is a grave and insidious threat to the church of Thyatira and to her sister churches. She is a false prophetess who is attracting converts to the road of compromise that Jesus rebukes in the Pergamum letter. The road of compromise is attractive, because it could both spare them from persecution and help them to succeed in their pagan environment. According to Jezebel, worshipers of Jesus can also worship pagan idols, which includes eating the meat of pagan sacrifices (2:20). They are in danger of becoming like rebellious Israel during the reign of Queen Jezebel. Abundant Old Testament examples show, however, that those who choose the road of compromise will face God’s judgment. Thus, Jesus promises imminent and deadly judgment upon Jezebel and her followers. He is about to remove those who refuse to let go of the false teaching of Jezebel and return to the pure teaching of Christ. The dangers of false teaching, compromise with the world, and idolatry are elements of the letter to Thyatira that threaten the church in all ages. As he did in the Pergamum letter, Christ stresses that the rewards of faithfulness to God are much more desirable than the judgment that will come upon those who adopt Jezebel’s road of compromise.

Significance for the Church Today: The Perennial Danger of False Teaching

Somehow, Jezebel deceives many into adopting her teaching, even though it directly contradicts the plain teaching of the Bible, including much of the Old Testament. Nicolaitan teachers are having similar success at Pergamum.

In every age and cultural situation, the church is vulnerable to false teaching that conforms to values that are dearly held in her cultural context. In Asia Minor, worship of pagan gods and the Roman Emperor was an entrenched element of the social order. The false teachers thought that they had found a way to compromise with the culture and to serve God at the same time. At Thyatira, Jezebel was so convinced that her road of compromise was right and good that she ignored the initial warnings that Jesus gave to her. Jesus’ words of judgment demonstrate the importance of being on the alert for false teaching and of understanding the Bible well enough to spot false teaching when it comes along. In this respect, we want our churches to be more like Ephesus and less like Pergamum and Thyatira. Where do you see false teaching creeping into our churches today?

Paul Hoskins, The Book of Revelation: A Theological and Exegetical Commentary, pp. 93-94, 101.